Technologies based on micro electro mechanical systems (MEMS) present advantages for rheological applications as they enable the fabrication of smaller sensors with faster response times. In this work we propose fabrication parameters and simulation of a MEMS viscometer. This research presents the design considerations and feasibility regarding the use of capacitive micro-machined ultrasound transducer (CMUT), for viscosity sensing applications.

A novel CMUT based micro-viscosity sensor is designed. As shown in the Figure 1 (A), two CMUTs one transmitter and other receiver are subjected in a vertical column facing each other with fluid in inspection between them. The mechanical performance and resonant characteristics of receiver CMUT will be changed by the viscosity of its surrounding fluid medium, due to the damping effect of the liquid. Thus, affecting the ultrasonic signal generated at the receiver, under same driver conditions.

The model describes the parameters of isolated transmitter CMUT and neighboring receiver CMUT which acts like an impulse resonator. The acoustic pressure described in the fluid depends on the plate dimensions and electronic excitation of the transmitter CMUT. The entire model is simulated through various domains of physics like Electronics, Structure Mechanics and Fluid Mechanics. In this paper, to study the entire working of the rheological device, simulations were done in parts using various COMSOL® physics in COMSOL Multiphysics® software. Time domain and frequency domain studies are computed to understand the functioning of the device. As the device was axis symmetric, a 2D axis symmetric geometry was used to reduce simulation time and have a 3D idea of the simulation results.

The design variables were optimized for the experimental measurements of viscosity, and this testifies the capability of MEMS as a potential candidate for the versions of viscometers and associated types of fluid sensors. The results obtained from the simulation are validated with analytical results at various frequencies. 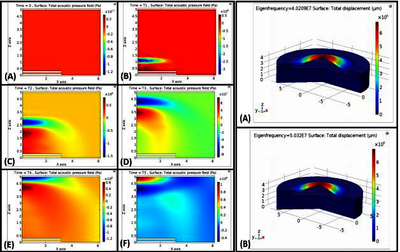