Thermal ablation is rapidly becoming a standard of care for the treatment of atrial fibrillation (AF), a cardiac disorder characterized by irregular heart rhythm and estimated to impact more than 33 million people worldwide (Chugh et al. Circulation (2013)). AtriCure is a company that specializes in epicardial ablation for AF and here we describe modeling the performance of the Isolator Synergy Clamp bipolar radiofrequency device. The clamp device features two jaws with embedded electrode pairs, which are used to secure the tissue. Energy is applied between the bipolar electrodes at approximately 460 kHz through an impedance-based control algorithm and is additionally switched between the pairs to further distribute the heating. Patient anatomies vary greatly and measured impedance will depend on atrial wall thickness, epicardial fat, electrode-tissue engagement, and structural variations. Further, tissue conductivity (inversely related to impedance) increases as the tissue is heated, leading to a complicated process, where the heat generation depends on the impedance, which in turn is a strong function of temperature. Energy delivery continues until a phase change in the tissue’s water content occurs, producing a sharp increase in impedance and termination of the ablation.

This process is simulated in COMSOL Multiphysics® 5.3 through the AC/DC Electromagnetics and Heat Transfer modules. The device is relatively uniform along its engagement length (here assumed 65mm), so the geometry is modeled as a 2D cross-section of the clamps and atrial tissue. A quasi-static approach is assumed for the electromagnetic physics due to the relatively large wave-length at 460 kHz. The functions for conductivity were developed based on literature review and our own controlled impedance measurements. Conductivity is assumed to increase by 2% per °C and undergoes a phase transition around 100°C with the latent heat of vaporization estimated based on the water content of atrial muscle. Further, as the clamp produces significant compression, an adjustment factor is used to scale the conductivity of the tissue between the jaws. All other material properties are assumed constant, based on literature values. Power control is achieved through a Terminal boundary, which switches between constant power, current, and voltage modes, based on a global equation with indicator states that are triggered by events determined by the calculated terminal impedance. Electrode pair switching is simulated with a time-averaged power approximation. This assumes that no significant thermal transfer occurs at the switching time-scale, an assumption that is still being validated. However, solve times are two to three orders of magnitude slower with direct simulation of switching (minutes versus days). Finally, exposed tissue and device surfaces are subjected to natural convective cooling. The coupled physics is solved based on the electromagnetic heat source multiphysics and the transient solution is run until the impedance spike is achieved. Preliminary work has focused on ablation of homogeneous myocardium and the results agree with expected device behavior (based on impedance response, power delivered, and isotherms achieved). On-going work includes benchtop validation experiments and efforts to incorporate the impact of epicardial fat layers and anisotropic tissue fibrosis. 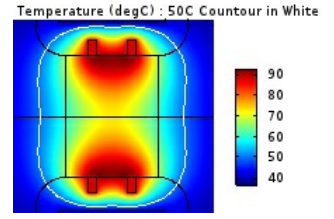