Blood-brain and blood-tumor barriers (BBB and BTB) constitute a major obstacle to the transport of therapeutics in brain tumors. Focused ultrasound (FUS), when combined with circulating microbubbles, provides a noninvasive method to locally and transiently disrupt the BBB/BTB. Preclinical research over the past decade has shown that FUS-BBB/BTB disruption can lead to an average of 4-fold increase in the delivery of a range of anticancer agents in brain tumors. However, there is a lack of fundamental understanding of how physicochemical drug properties, such as size and cell binding affinity, influence the effects of FUS-mediated BBB/BTB disruption on interstitial transport and cellular uptake in the highly heterogeneous tumor microenvironment. Mathematical modeling is an important tool for elucidating mechanisms governing drug transport. In this study, we developed a computational framework using the COMSOL Multiphysics® software for the prospective, quantitative, and mechanistic investigation of the penetration of anticancer drugs across the BBB/BTB in brain tumors with the goal to develop therapeutic protocols for optimal intratumoral penetration.

Our mathematical model simulates the transport of anticancer agents through the bloodstream and across the endothelium into the interstitial space of a tumor along with their uptake by tumor cells. The blood inside the vessel is simulated as laminar flow and the fluid flow through vascular wall and interstitial space is modeled using the Free and Porous Media Flow interface. The anticancer agent transport is modeled as a reaction-convection-diffusion problem using the Chemical Species Transport interfaces. Firstly, in order to obtain the drug transport parameters pre- and post-FUS, we used a single vessel geometry and fitted the model prediction to the experimentally determined interstitial drug pharmacokinetics using a numerical optimization procedure. Then we expand our model using a synthetic tumor-like vascular networks geometry to study the influence of the spatial structural heterogeneity of the brain tumor microenvironment on the interstitial drug transport. Finally, we conducted sensitivity analysis to study the relative importance of the different transport parameters, which allow us to further refine therapeutic interventions.

Taken together, our study demonstrates that focused ultrasound-induced BBB/BTB disruption overcomes the transvascular transport barriers in the brain tumor microenvironment and increases drug penetration and cellular uptake. This work forms the basis for the rational design of the anticipated clinical trials (Phase III) of this technology in primary brain tumors and, ultimately, for identifying FUS-nanomedicine combinations for optimal intratumoral penetration and uptake. 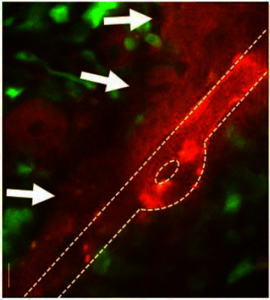