In COMSOL Multiphysics®, you can manually administer couplings between physics interfaces for which no coupling features are available. We refer to this as the manual approach with user-defined couplings. Here, we discuss how to implement the approach with a combination of physics phenomena in your model. The approach requires more effort to implement than the manual with predefined couplings approach and completely contrasts the automatic approach, which provides an almost fully automated implementation.

When to Use the Manual Approach with User-Defined Couplings

When there is no alternative predefined option to define the multiphysics couplings in a model, there is functionality in the software that provides you with the flexibility to manually implement custom multiphysics couplings. This is done through user-defined variables, expressions, equations, or functions to couple different physics interfaces. We refer to this multiphysics modeling approach as the manual with user-defined couplings approach, since it involves manually administering the coupling and interaction between physics interfaces.

This approach is wide and vast with respect to how it can be implemented for defining multiphysics models. There is no standard that dictates how it necessarily should or can be implemented, as it will vary depending on what is being modeled. Some examples include using expressions to make material properties or boundary conditions functions of the dependent variables of another physics interface. 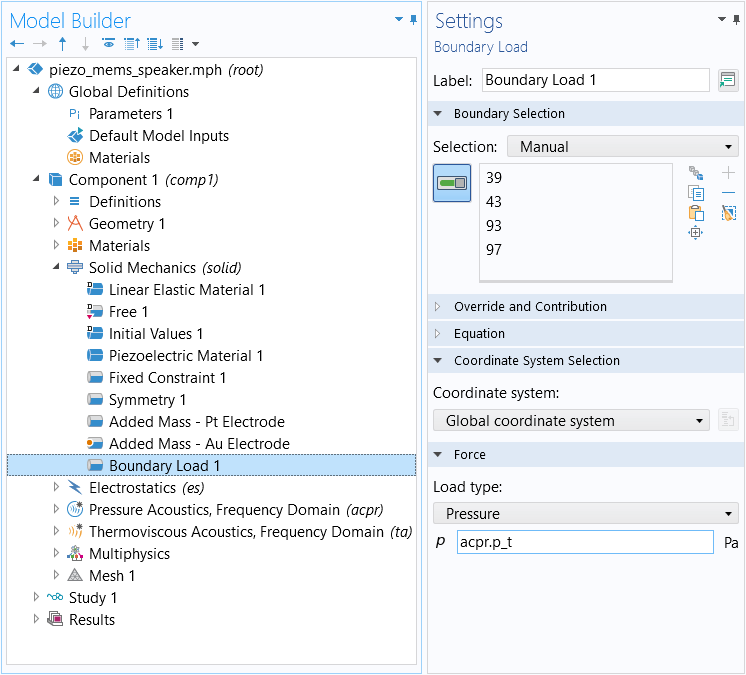 In the Piezoelectric MEMS Speaker tutorial model, a Boundary Load is used to manually couple the Solid Mechanics interface and Pressure Acoustics, Frequency Domain interface. However, this is also available as a predefined multiphysics coupling in the Acoustics Module.

A screenshot of the model tree with the Equation View option under the Pressure Acoustics node selected, with the list of variables shown on the right.
Equation View for the Pressure Acoustics node, from which a variable is used for a boundary condition in another physics interface (as pictured in the previous screenshot) in order to manually couple the two physics interfaces.

Procedure to Implement the Approach

As noted earlier, the manual approach using user-defined couplings can be implemented in a variety of different ways. Although there is no explicit sequence of steps that must be followed, the general procedure for using the approach is as follows:

As noted earlier, since this approach is the most prone to errors, it is important to always check your results after computing the model. You'll notice that defining the physics settings is split into two parts: defining each individual physics interface and then defining the multiphysics couplings. Each physics interface defines its dependent variables and a set of derived variables. A dependent variable may be, for example, the temperature variable. Derived variables may be the components of the heat flux vector, which are defined using the temperature variable. The heat transfer equations are solved for the temperature, while the heat flux components may be used to formulate these equations or to generate streamline and arrow plots when the temperature field is obtained in the solution.

The derived variables defined and used internally by COMSOL Multiphysics® can be inspected and changed directly in the UI. By clicking Show More Options in the Model Builder toolbar and selecting the Equation View check box in the dialog box, all variables and equation contributions defined by each node in a physics interface become visible and editable. 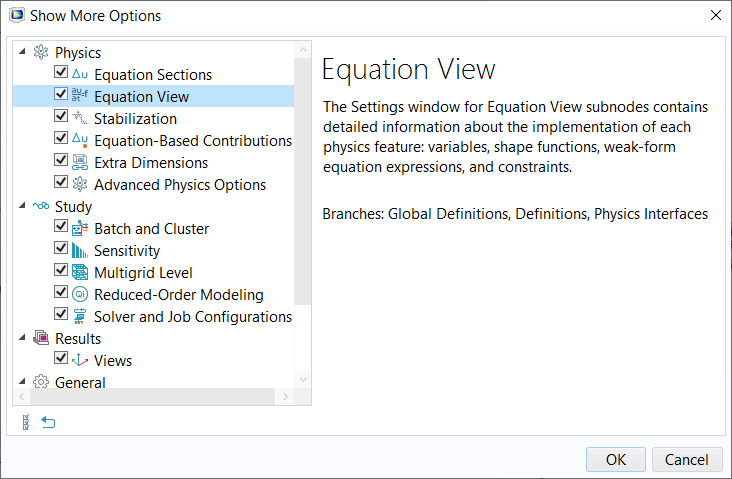 Enable showing the Equation View nodes in the model tree by clicking the respective check box.

This means that you can directly change or add terms to the already predefined derived variables. For example, assume that you want to add a contribution to an already defined heat source. Then you can locate the corresponding derived variable in the Equation View node settings and add the contribution, which may, for example, be an expression of the electric potential. In the edit fields in Equation View, you can enter any expression of a dependent variable, derivatives of dependent variables, and other derived variables.

Below, we show how you can used derived variables and the Equation View node settings to define multiphysics couplings.

Similar to the other articles discussing the other approaches for defining multiphysics models, let's use the thermal microactuator tutorial model to show how we would define the multiphysics effects manually. Also, similarly to the other articles, it is assumed that all details regarding the model setup, except for the physics, have been completed. A detailed overview of the device and the physics involved in its operation are described in the Learning Center article introducing the fully automatic approach.

Note: For this combination of physics phenomena, a predefined multiphysics interface, the Joule Heating and Thermal Expansion multiphysics interface, is available to be used and is what we would add to our model instead of using this approach. We recommend employing either the fully automatic or manual with predefined couplings approach for defining the multiphysics in your models whenever possible, as the manual with user-defined couplings approach requires a completely manual implementation. The following walkthrough is meant for demonstration purposes only. 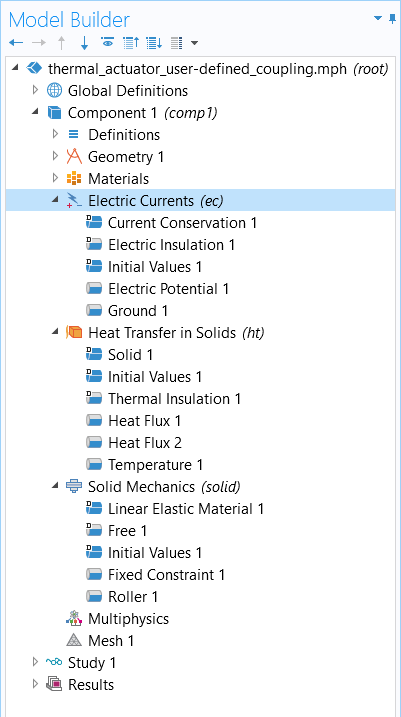 The model tree thus far for the thermal microactuator tutorial model, with the multiphysics effects not yet accounted for.

Since the electric heating is a heat source, it would be logical to define the effect under the Heat Transfer in Solids interface and use an expression that is a function of the electric field and the electric conductivity. We also know that the heat source may be present everywhere in the model domain in this case. We can therefore select the Physics ribbon tab, while the Heat Transfer in Solids interface is selected, and locate the Heat Source feature under the Domains menu to create the multiphysics coupling. 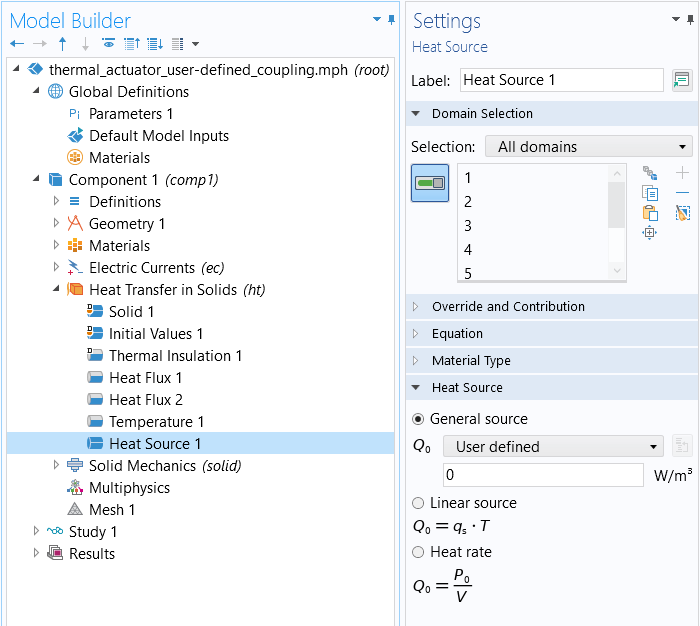 All these steps can be avoided, since the electric heating is predefined and can be added automatically by the multiphysics node. However, in cases when a coupling is not predefined, you would use the strategy outlined above.

A screenshot of the Model Builder, with the model tree on the left showing the Equation View node selected under the Current Conservation node, with the Settings window on the right.
The Equation View node for the Current Conservation node. The variable ec.Qrh is used to introduce electric heating as a heat source in the modeling domain, i.e., to couple the equations for the electric potential with the equation for temperature. 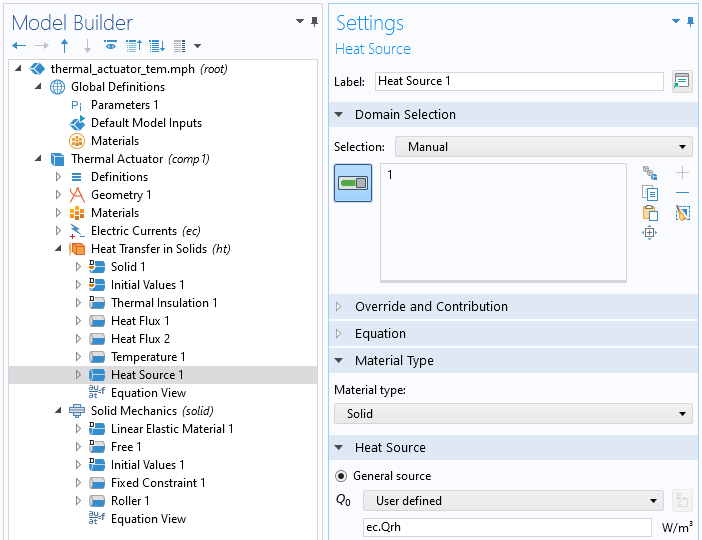 The Heat Source domain feature with the updated settings for the value applied.

Note: You can also couple the physics for this model by adding Thermal Expansion as a subnode to the Linear Elastic Material node. However, we will ignore that such a feature is available for the purposes of this demonstration to implement the manual approach using user-defined couplings. 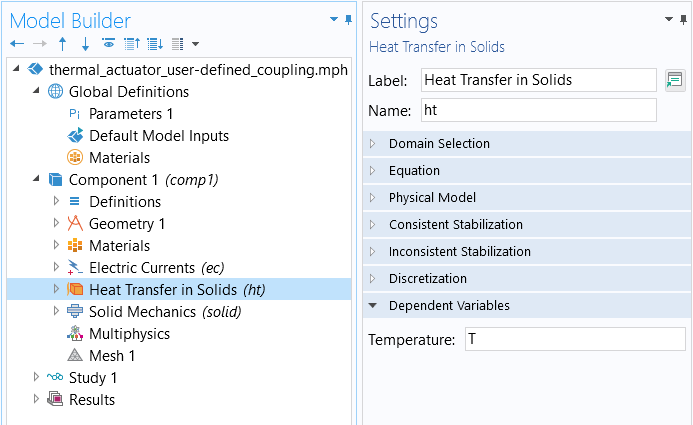 The dependent variable, T_, for the_ Heat Transfer in Solids interface, which we can incorporate into expressions used for the Solid Mechanics interface.

Enabling the Equation View allows us to access all the variables and the expressions used for the Linear Elastic Material node. Here, we can modify the equations to define any coupling between the strain and temperature.

We'll want to modify the strain definition for the variables solid.eXX, solid.eYY, and solid.eZZ using the equation for thermal strain,

wherein α is the material's thermal expansion coefficient, T the temperature field, and T0 is the strain reference temperature. The values for α and T0 are known and defined by the parameters alphaps and T0, respectively. We can add the contribution to the strain tensor components as seen in the screenshot below. Note that this expression for thermal expansion is valid only for relatively small deformations, which we may assume that we have in our case.

To see this approach be implemented for modeling this combination of physics, you can watch the video below for a full demonstration.

Demonstrate the knowledge you have gained from this article by putting it into practice with the follow-up modeling exercises listed below. The directions provided for each modeling exercise contain all the information necessary in order to complete it, but are intentionally generalized to encourage self-guided problem-solving. You can check your implementation with the solution model files provided by comparing them manually or using the Comparison tool to exactly identify the differences.