Understanding and Changing the Element Order

In the settings for a physics interface node in COMSOL Multiphysics®, there is a Discretization section where you can see the element order being used. You have the option of changing this setting. Here, we discuss both the meaning and significance of the element order and discretization for a simulation, how you can change the settings for it, and what effect this has on the mesh and solution for your model.

What Is the Meaning of Element Order and Discretization?

Most physics interfaces within COMSOL Multiphysics® use the finite element method to solve the underlying partial differential equations. The finite element method works by discretizing the modeling domains into smaller, simpler domains called elements. The solution is computed by assembling and solving a set of equations over all of the elements of the model. The solution to these equations approximates the true solution to the partial differential equation. 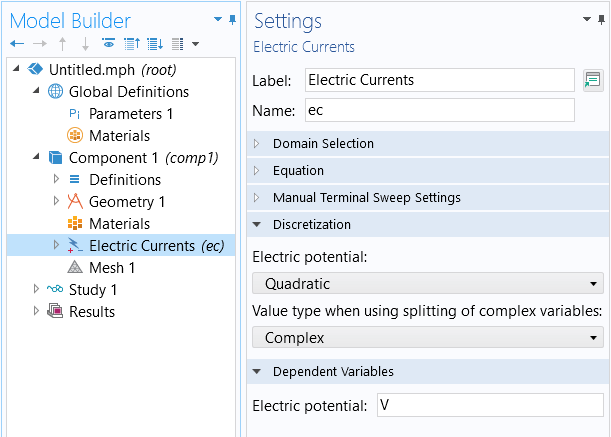 The discretization settings for a physics interface.

The default discretization in many cases is second order (quadratic), and this is partially because many of the partial differential equations have a dominant second derivative term. Problems involving fluid flow and transport are generally by default using a first-order, linear discretization. Based upon the particular modeling situation, changing the discretization may be motivated, and it is possible to change the discretization for each different physics interface independently, but doing so has several consequences.

There are sometimes additionally the options of Lagrange and serendipity elements for the quadratic and higher discretizations. This setting has an effect only if rectangular, prismatic, pyramidal, or hexahedral elements are present in the mesh. The Lagrange element introduces additional nodes (degrees of freedom) within the elements as visualized in the figure below. Although the serendipity element has fewer nodes per element, it often exhibits quite good accuracy for the same mesh but a lower computational cost compared to the Lagrange element. If a mesh can be created that is dominated by rectangular, prismatic, pyramidal, or hexahedral elements, it is usually worth using the serendipity discretization, if it is available within the physics. 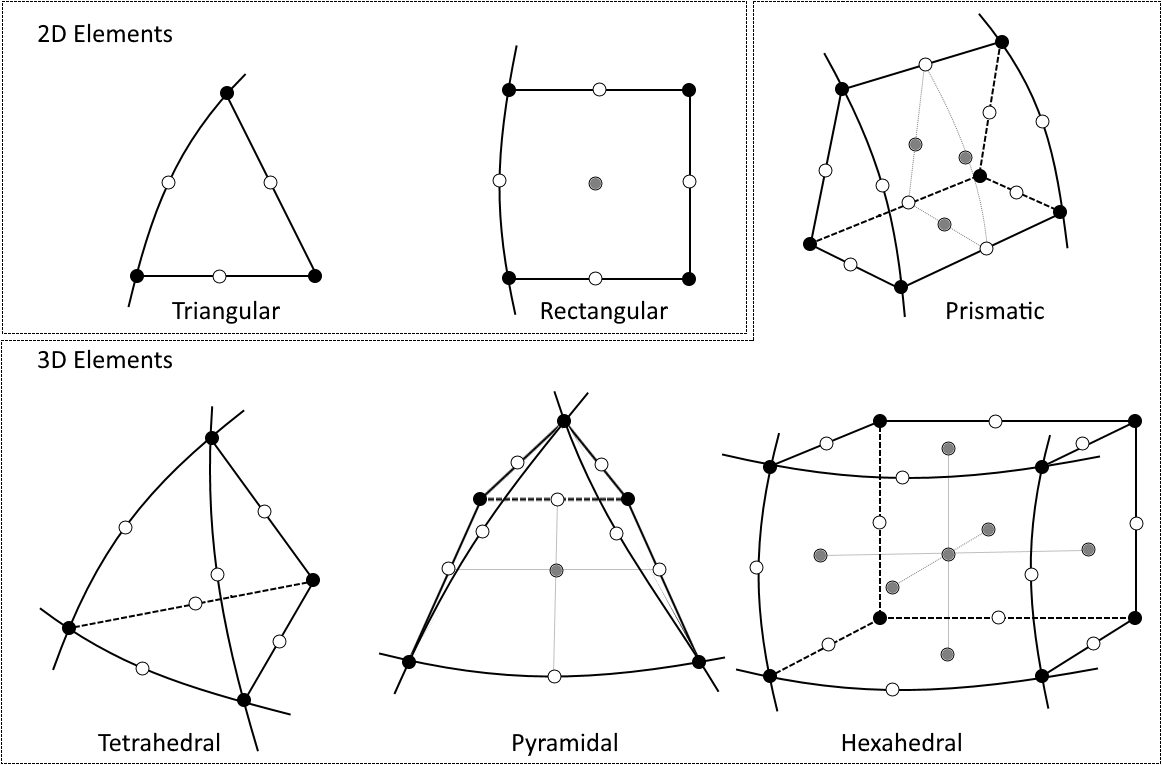 When modeling in 2D, 2D axisymmetry, or 3D, the discretization settings within the physics also affect the mesh elements. The mesh elements in 2D and 3D additionally serve the purpose of approximating the true CAD geometry, and they do so by approximating the shape of the boundaries of the model via a set of geometric shape functions that have the same order as the lowest discretization order used in any of the enabled physics interfaces within the model.

For example, consider a semicircular domain, as shown above, discretized with the simplest possible mesh consisting of a single triangular element. The straight sides of the modeling domain are precisely represented regardless, but the curved boundary can only be approximately represented by the geometric shape functions. With a linear shape function, this approximation reduces to a triangular element that quite poorly represents the modeling domain. Quadratic and cubic shape functions give a much better representation of the underlying geometry. A consequence of this is that, when linear geometry shape functions are used, you generally need a much finer mesh on curved boundaries just to get an accurate representation of the underlying CAD geometry. A good rule of thumb, when using linear geometry shape functions, is that at least 8 elements are needed per 90° arc to resolve the boundary with less than 1% error. On the other hand, with quadratic and higher-order shape functions, even just two elements per 90° arc are sufficient to be significantly below 1% error in representing the CAD geometry. These rules of thumb are only starting points as to how to create an initial mesh; a mesh refinement study is always called for. 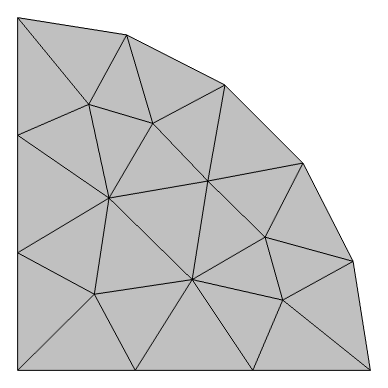 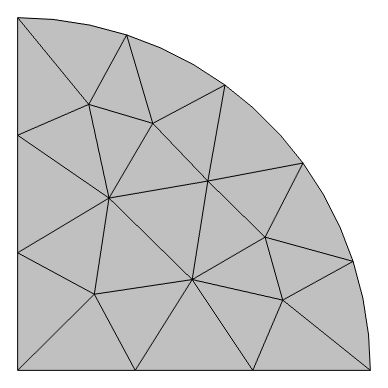 A semicircular domain is meshed using a linear Lagrange (left) and cubic Lagrange (right) geometry shape function. Note the difference in how the curved boundary is represented.

The information about the geometry shape order is also shown near the top of the log that is generated when the model is solved. This log file will look something like:

When a model includes several different physics, it is possible that one physics will have different discretization settings from the others. The geometry shape order will, by default, be governed by the lowest-order discretization in any of the active physics. An explanation for what discretization is used for some physics and combinations of physics is given below.

Please note that although it is possible to manually set the geometry shape order within the General settings for the Component node in the model tree, this should only be done with a thorough theoretical understanding.