The geometric multigrid (GMG) solver accelerates the convergence of the iterative solver by solving the finite element problem on a series of meshes rather than a single one. The multigrid algorithm starts with the initial physics-controlled mesh or user-defined mesh and automatically builds a series of coarser meshes.

A model of a meshed sphere inside a cube-shaped modeling domain.

A model of a sphere in a cubic modeling domain with a coarse mesh.

A model of a sphere inside a cube-shaped modeling domain, meshed with a coarse setting.
Example of a series of multigrid levels. The original mesh (left) and two coarser multigrid levels (center and right) are pictured.

Each additional mesh is approximately twice as coarse as the previous one. The total number of meshes depends on the size of the model. Multigrid meshes are automatically built by the solver until the coarsest mesh leads to a low enough number of degrees of freedom to be solved with a direct solver.

While building the multigrid levels, the mesh size on the coarsest meshes might become larger than the size of the model’s smallest geometrical features. This is typically the case when the geometry includes small features or parts with a high aspect ratio. There are some different approaches that we can use to address this, which we discuss below.

Different strategies can be used to resolve large models containing complex geometries with the iterative multigrid solver. To illustrate them, we consider the example model geometry pictured below. 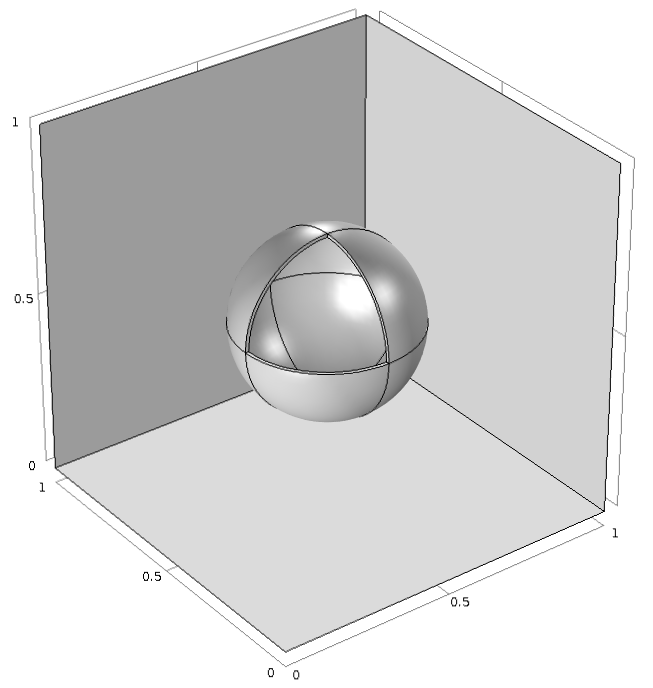 An example model geometry wherein a manual setup for the GMG solver is demonstrated. The geometry consists of a block containing a sphere that has a thin outermost layer.

This cube, made of one material, includes a sphere made of a second material and is coated with a thin layer of a third material. The thickness of this layer is much smaller than the size of the sphere, which would cause the multigrid solver to fail. Regardless of the type of geometry you are working with and the features contained therein, there are ways we can resolve this issue when encountered and proceed with using the GMG solver.

Rather than letting the mesher automatically build coarser meshes from the initial mesh, manually build and replace the meshes that failed with user-defined meshing sequences. Then, select these meshes within the multigrid solver settings. The number of multigrid levels required to solve the model discussed in this article can be seen in the Settings window below for the Multigrid 1 node. 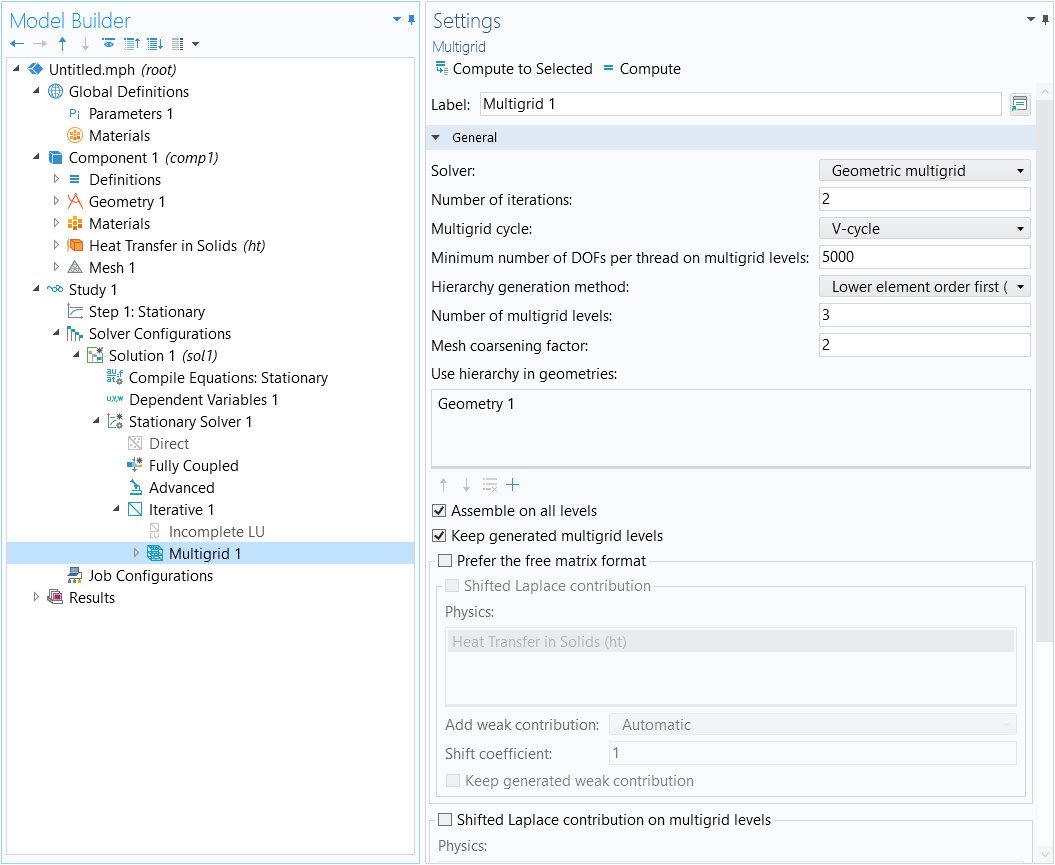 The settings for the multigrid solver node used to set up a GMG solver.

In this example, three additional meshes are required, as seen in the Number of multigrid levels field. After clicking the Compute button, the solver returns the error message: "Problem setting up multigrid". To visualize the multigrid meshes and see how many of them failed, we can select the Keep generated multigrid levels check box in the settings for the Multigrid 1 node (pictured above). After recomputing the solution, the multigrid levels are added as subfeatures to the study step node Step 1: Stationary. 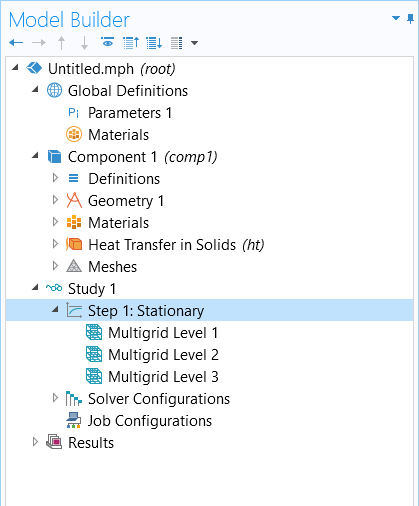 The multigrid levels added under the Stationary study step after the model is recomputed.

If you are unable to see the multigrid levels that populated under the study step node, you may need to toggle on the advanced study options available in the software. To enable viewing these nodes, you can use the Show button in the Model Builder toolbar and select the Multigrid Level check box under the Study category.

A screenshot of the Model Builder ribbon and model tree, with the Show More Options button highlighted.

A screenshot of the Show More Options dialog box with the Multigrid Level option highlighted.
Clicking on the Show button in the Model Builder toolbar (left) and selecting the check box for the Multigrid Level option (right) in the Show More Options dialog box enables you to view the multigrid levels generated under your study step node.

The corresponding coarser meshes will appear in the model tree. Mesh 1 is the original mesh. Meshes 2 through 4 represent the multigrid levels 1 to 3, respectively. As seen in the below snapshots, Mesh 4 fails because it is too coarse to discretize the geometry.

A screenshot of the model tree, showing an example of a mesh failure.

A meshed sphere in which an error occurs where layers intersect each other.

A sphere that has been meshed with a swept, structured mesh, avoiding errors.
Mesh failure example. An error appears in the Model Builder as a result of_ Mesh 4 causing the multigrid solver to fail (left). The surfaces on each side of the thin layer intersect each other, leading to meshing errors (center). The mesh consist of tetrahedral elements. The intersection of these surfaces does not occur when using a swept (structured) mesh for the thin layer rather than the default tetrahedral elements (right).

In order to fix Mesh 4, we can follow one of these procedures:

We can build the meshes for each multigrid level manually using user-defined meshing sequences. Each subsequent mesh should be approximately twice as coarse as the previous one. Set the initial mesh to Mesh 1 in Step 1: Stationary and set the additional meshes as multigrid level subfeatures to Step 1: Stationary (Multigrid Level 1 and 3, for instance, should be set to Mesh 2 and 4, respectively.) 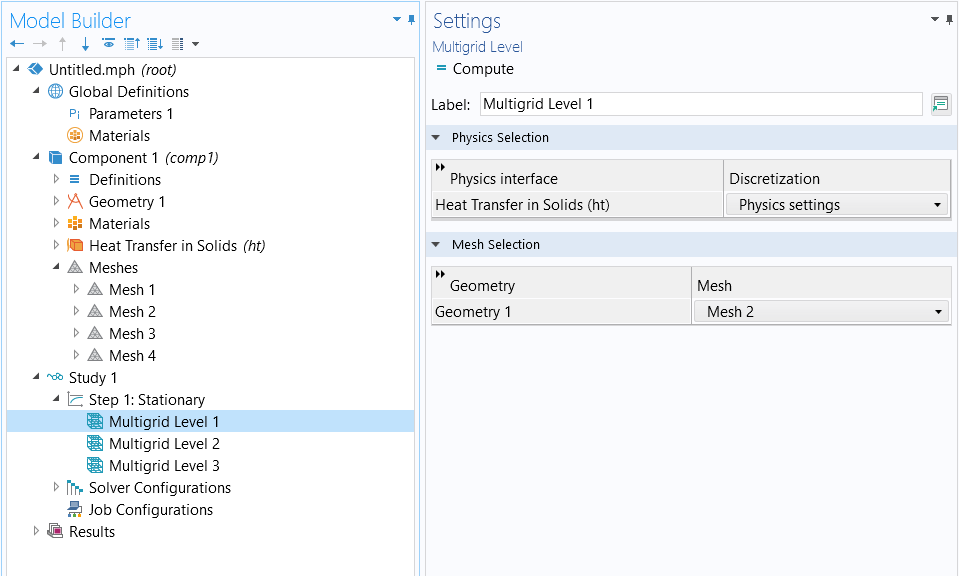 Settings window for one of the Multigrid Level nodes, where the geometry and mesh selection to be used is specified.

If the multigrid level subfeature is not available, activate the advanced study options in the Show button in the Model Builder toolbar as discussed earlier in this article. Lastly, in the solver settings, we will want to change the Hierarchy generation method to Manual. Upon switching to Manual, you will see the Settings windows update.

A screenshot of the multigrid solver settings when set to the default options.