In Part 6 of this course on modeling with partial differential equations (PDEs), we will learn how to use the PDE interfaces to model systems of equations. As an example, we will use the Coefficient Form PDE interface to recreate the built-in functionality available in the Joule Heating multiphysics interface, available from the Model Wizard. Using the predefined multiphysics interface for Joule heating is, of course, much easier and quicker for this type of modeling compared to implementing this by hand. However, learning how to set up the corresponding equation system from scratch will prepare you for setting up more general systems, including systems that are not available as a built-in option in the COMSOL Multiphysics® software.

All PDE interfaces and equation forms support the use of multiple dependent variables in a system of PDEs, which can be coupled in several different ways. For a complete description of what options are available for modeling systems of equations, see the COMSOL Multiphysics Reference Manual documentation, specifically the Multiple Dependent Variables — Equation Systems section of the chapter, Equation-Based Modeling.

There are several different types of equation systems that can be modeled using the equation-based, or Mathematics, interfaces. For example:

In this article, we will look more closely at the case of Joule heating, a system of type 1, as mentioned here.

When the equation system represents Joule heating, the system of PDEs can be written as:

Note that the Joule heating source term can also be written as:

There are multiple ways of defining a Joule heating system of equations in COMSOL Multiphysics®. To learn more about using the built-in options, see our Learning Center course on defining multiphysics models.

We can identify the first equation as Poisson's equation. This means that for the stationary version of Coefficient Form PDE:

we can identify the coefficients as:

and all other coefficients are zero. For the heat equation

we need to compare with the transient version of Coefficient Form PDE: 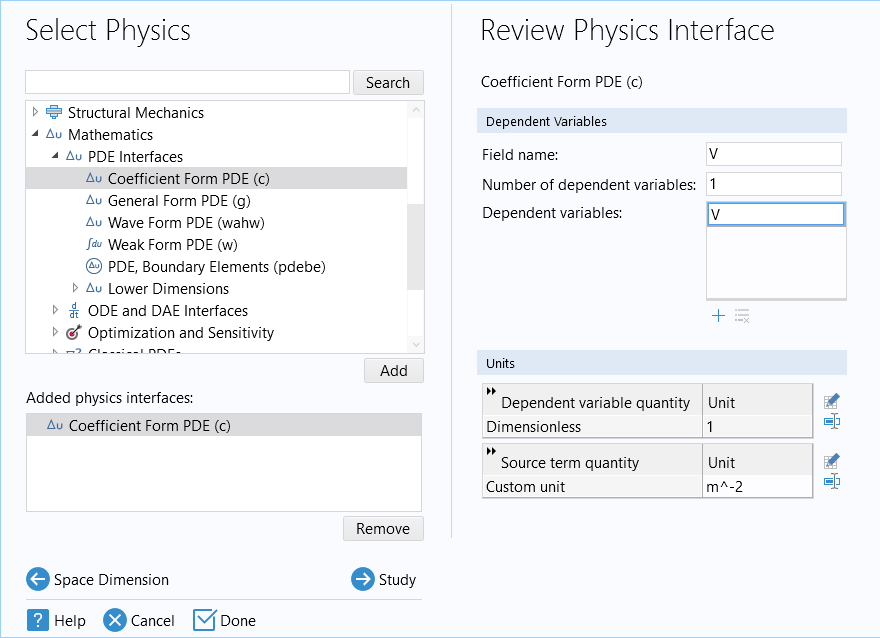 The Select Physics window, where the Coefficient Form PDE interface has been added to the model.

Next, add another Coefficient Form PDE interface with both Field name and Dependent variables set to T. 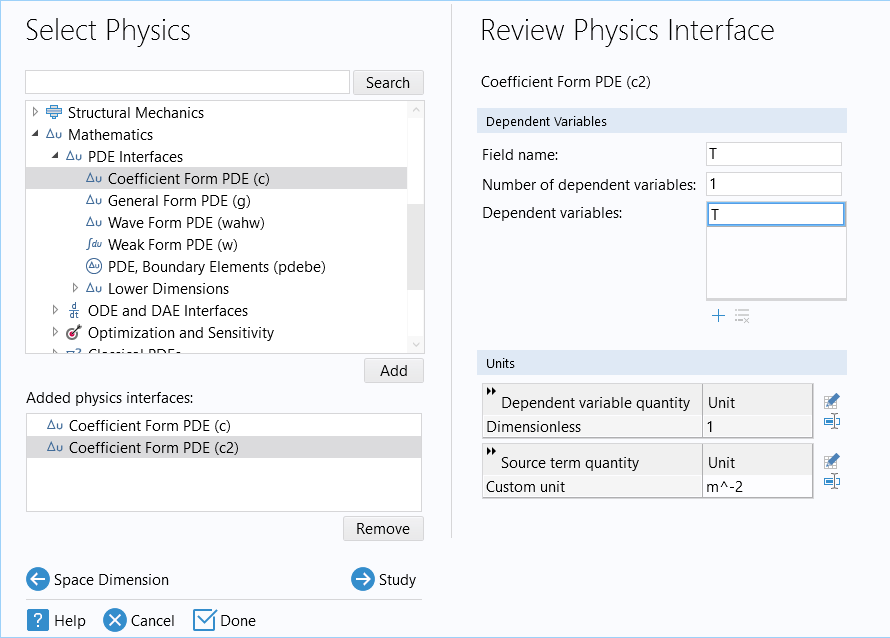 In the next step, select a Time-Dependent study. The Model Builder tree appears as follows: 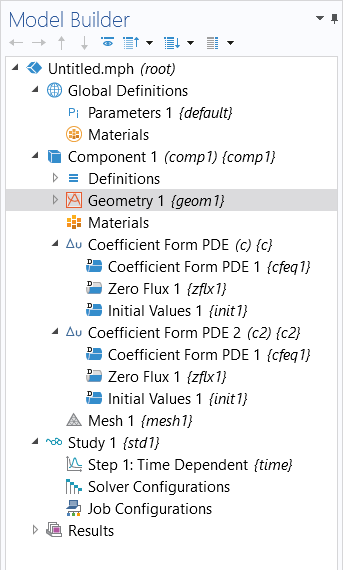 The model tree after adding the physics interfaces and study through the Model Wizard.

For this example, we will use a simple conductive block that is 1-by-0.1-by-0.01 mm, having a boundary condition of 1 V on one side and 0 V (or ground) on the other side.

The model geometry for a simple conductive block.

In the Settings window for the Coefficient Form PDE interface, change the units for the Dependent variable quantity to Electric potential (V) and the Source term quantity to Current source (A/m^3). 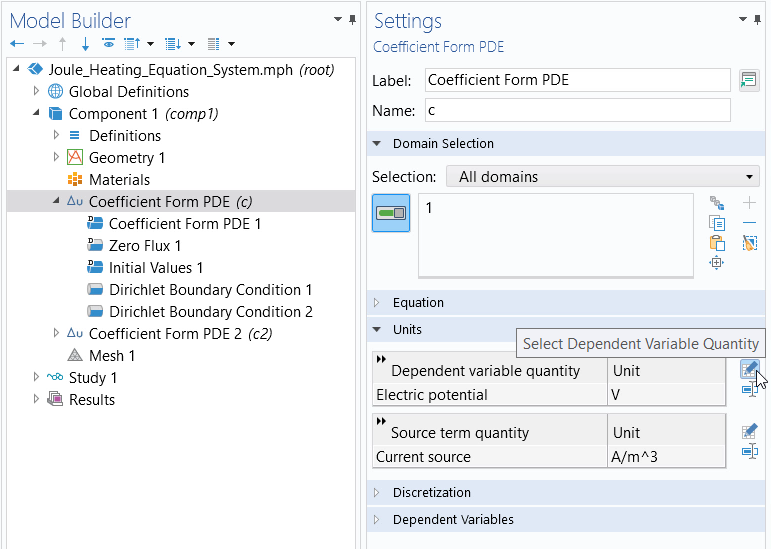 The settings for the first Coefficient Form PDE interface.

You can do this by clicking the respective icon (pictured below) that opens the Physical Quantity dialog box. From there, you can select the appropriate quantities.

If you do not want to work with units, you can select the Dimensionless option in the General section of the Physical Quantity dialog box.

If we assume an electric conductivity , corresponding to a moderately conductive material, then the Coefficient Form PDE node settings are as follows: 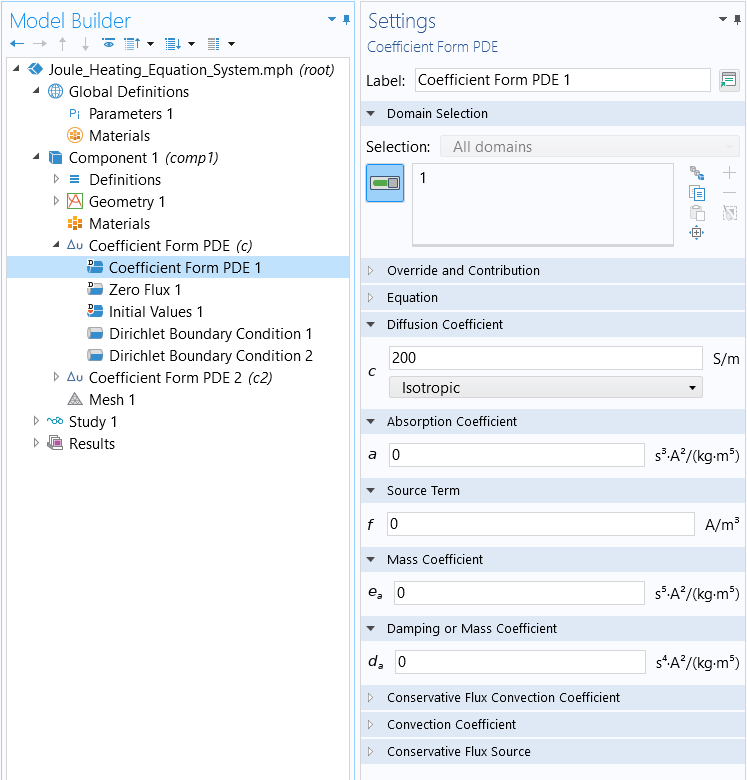 The settings for the Coefficient Form PDE node.

In the Settings window for the second interface, Coefficient Form PDE 2, change the units to Temperature (K) for the Dependent variable quantity and Heat source (W/m^3) for the Source term quantity. 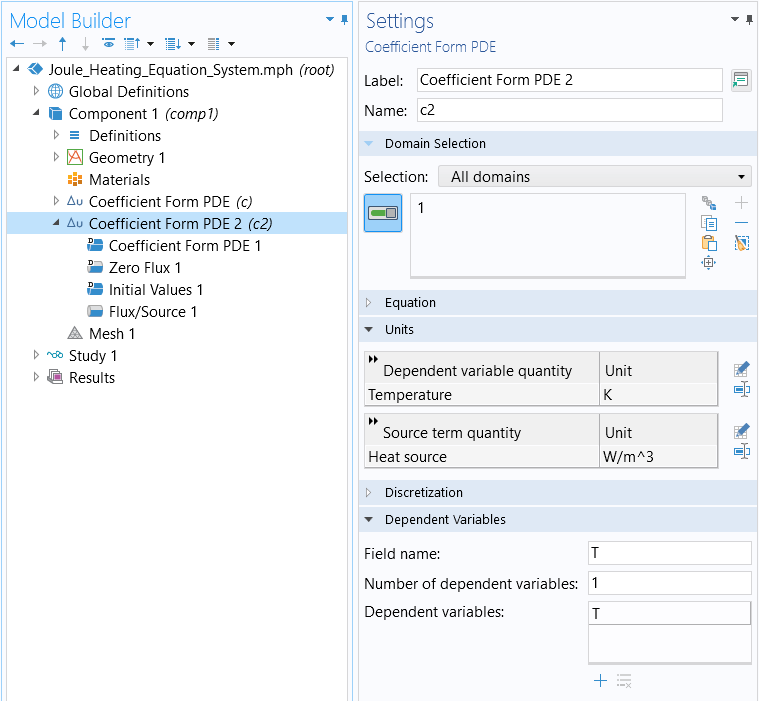 The settings for the second Coefficient Form PDE interface.

Using the electric conductivity and further assuming and , the Coefficient Form PDE node settings for the second equation are as follows: 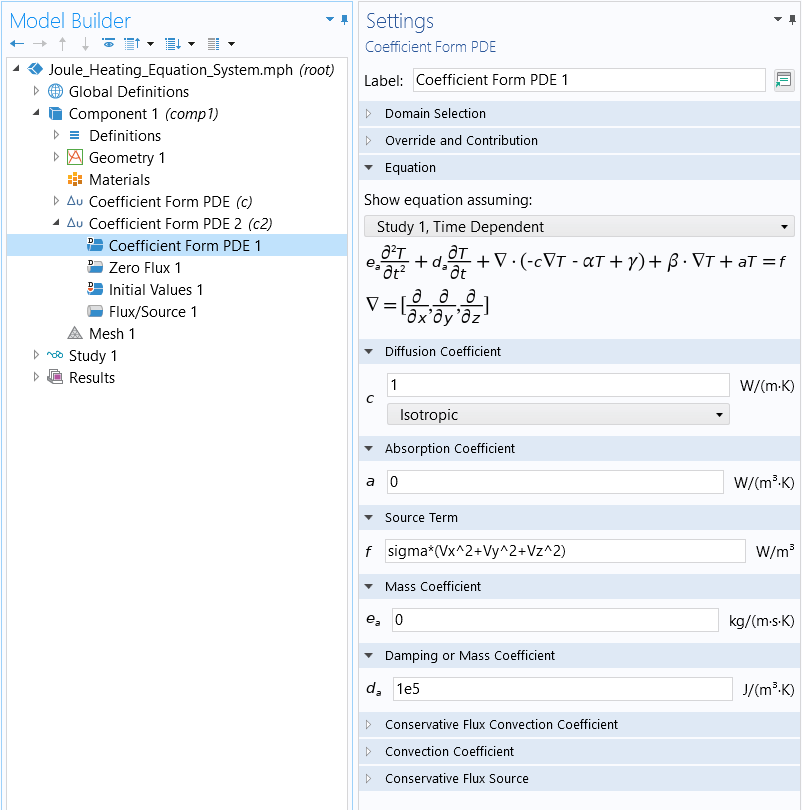 The settings for the Coefficient Form PDE node for the second equation.

where the source term corresponds to

For the second equation, for all boundaries, use a Flux/Source boundary condition: 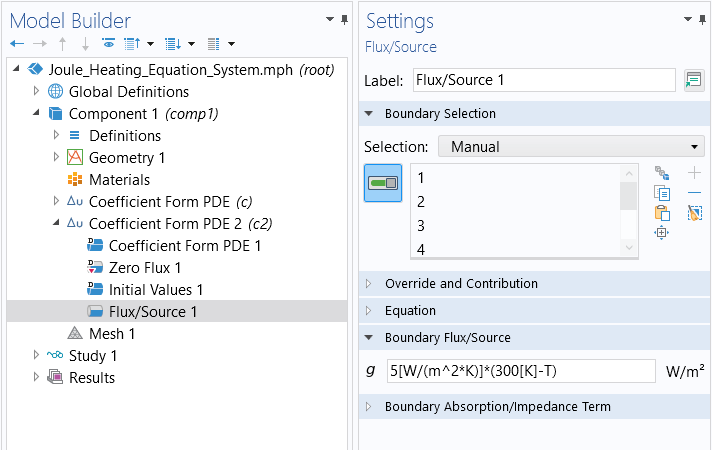 The settings for the Flux/Source boundary condition.

The second equation has a time-derivative term and therefore requires updating the values for the Initial Values node. We will assume that the device is at 300 K at time t = 0. Since this PDE only has a first-order time derivative, we do not need to worry about the initial condition for

The settings for the Initial Values node.

Now, run Study 1 using the default settings for the Output times between 0 and 1 seconds with results output for every 0.1 seconds. 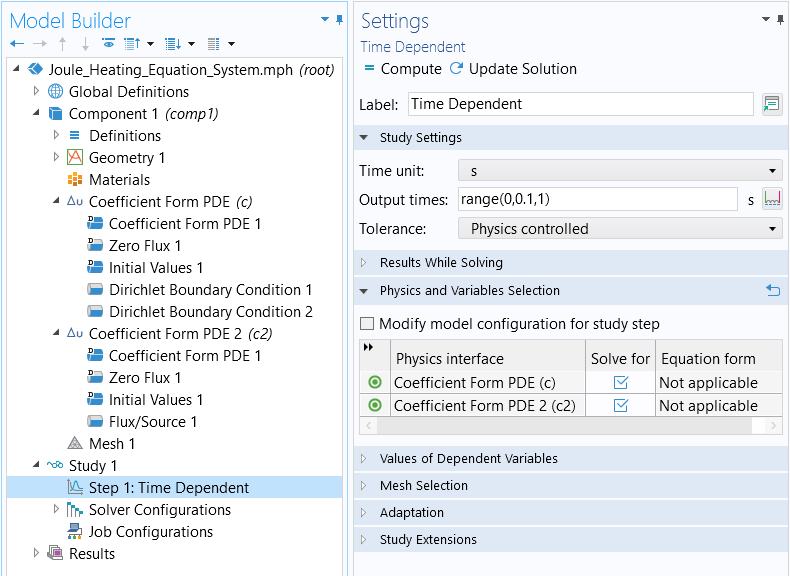 The settings for the time dependent study performed.

The result is a temperature of around 480 K at around 1 second. 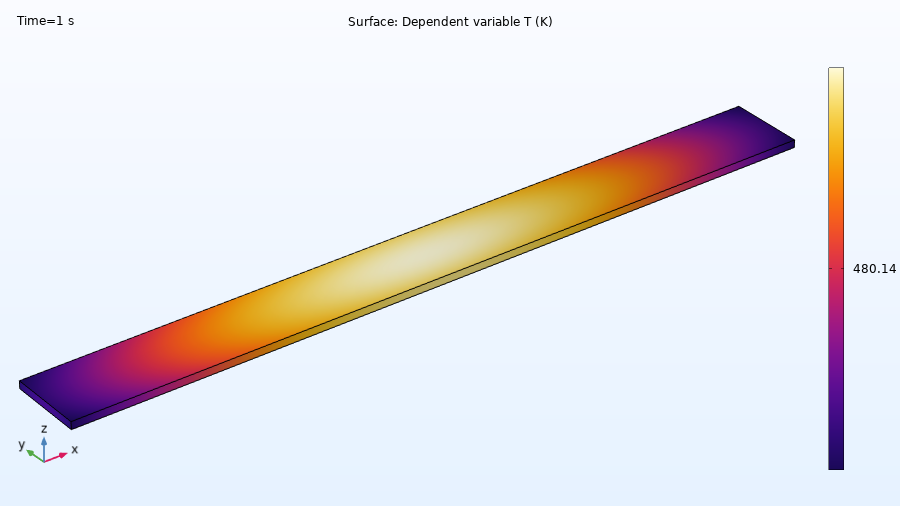 Results for the temperature distribution of the block.

We can also plot the voltage drop across the object. 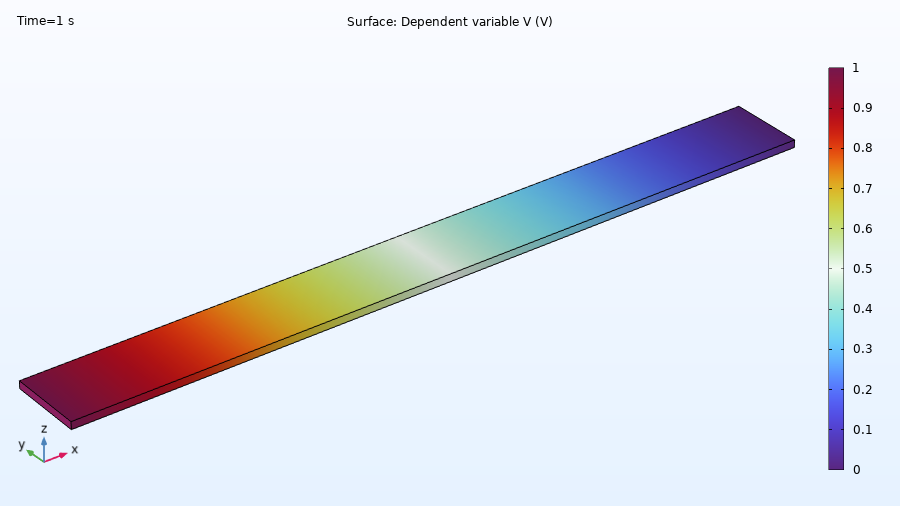 Results for the electric potential of the block.

You can now define variables for quantities, such as the electric field or current density, and then use them in expressions.

The variables defined after computing the study.

After solving again, we can, for example, visualize the variable normJ in a plot. 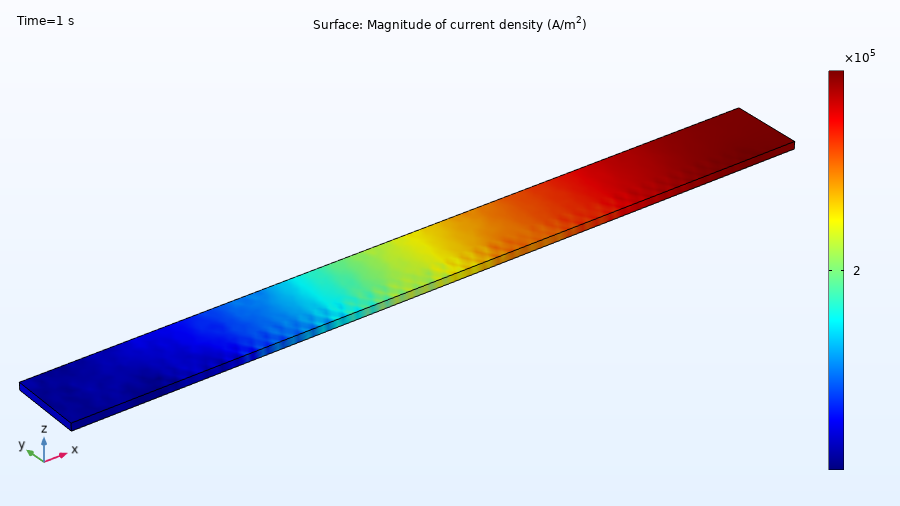 Results for the magnitude of current density of the block.

Although the model used throughout this article is available for download, we encourage you to first build the model yourself by following the guidance provided here. Thereafter, you can open and explore the model file. This will reinforce how to set up equation systems from scratch.