Organic light emitting diode (OLED) is an emerging technology for next-generation flat panel display and solid-state area lighting thanks to its many advantages such as light weight, low operating voltage, and flexibility, etc. A typical OLED has a multilayer structure that includes a glass or plastic substrate, an anode (ITO), a hole transport layer (HTL), an emitting layer (EML), an electron transport layer (ETL), and a cathode. Due to the mismatch in the refractive index between each layer, as well as absorption by metal cathode, only about 20% of the emitted light can leave the device, limiting the out-coupling efficiency of OLED (Figure 1). Among the many light out-coupling losses, coupling to surface plasmons amounts to about 40% of the total emitted light, and elimination/reduction of plasmon loss represents an ongoing challenge in improving the light extraction efficiency of OLED.

Here we use COMSOL Multiphysics® software and the RF Module to simulate and study the plasmon coupling in OLED and reduction of plasmon loss by using nano grating-structured electrode. The phosphor molecular emitter is modeled by a classic point dipole driven by continuous electric current, and Ag is selected as the electrode material in the simulation. Studies using the Electromagnetic Wave, Frequency Domain interface were performed in both 2D and 3D geometries. All boundaries except at the Ag metal surface are surrounded by Perfect Matched Layer (PML) to absorb outgoing waves. Special care has been taken for PML set up at the metal/dielectric interface region for appropriate absorption of surface plasmon polariton waves (SPP). Percentage plasmon loss is estimated by the ratio of integrated power into plasmon mode (resistive loss in metal + Poynting vector of SPP) with respect to the total emitted power of the dipole.

The simulation indicates that plasmon loss is mainly through the coupling of dipole emission into SPP, which is a surface wave confined at the metal/dielectric interface (Figure 2). The SPP is a lossy wave and its energy is eventually dissipated by the metal electrode as it propagates. To limit our focus on the plasmon effect, a simplified model of a two-layer structure comprising of a metal layer and the EML material was adopted to simulate the nano-structured electrode. As shown in Figure 3, by fabricating nano-grating structures at the electrode/EML interface, the coupling of dipole emission into SPP can be significantly reduced. Parametric studies were performed to explore the effect of the size, shape, and period of the nano-grating on the plasmon loss reduction. Our results suggest that ~50% reduction of plasmon loss over a broadband emission can be achieved by optimized electrode structure. When combining with technologies for extracting other modes, significant enhancement of the out-coupling efficiency of OLED is thus promising. 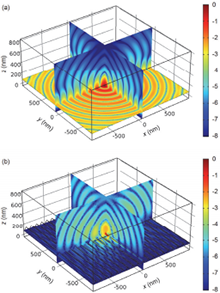