While the processes taking place in a bubble reactor are simple to describe in a few sentences it is much more difficult to give a physical description that is useful for engineering purposes. A better understanding of a cluster of bubbles dissolving in a liquid where the species transferred reacts with other dissolved species is an interesting engineering challenge that could result in simplifications of upstream or downstream process units. An example could be being able to predict, for a certain gas/liquid combination the maximum gas flow that would result in complete dissolution (and chemical conversion). It would allow for operating without a gas outlet for cases where no gaseous products are generated. This is the topic addressed in this paper, where CO2 is dispersed in an aqueous solution that contains dissolved calcium (Ca2+ ions), producing PCC, precipitated calcium carbonate (CaCO3). (Mattila and Zevenhoven, 2014) [1] Since the solution used also contains dissolved ammonia (NH3 (aq)) with a certain vapour phase, an exit stream of unreacted CO2 would also contain NH3, which would require an additional separation step to the process for its recovery.

The present paper proposes an application for an Euler-Lagrangian one-way coupling method in bubble tower design. A simplified flow field is presented as the basis of this research work for a slice of fluid and a rotating mesh model is presented as the base of the fluid flow field, in this case involving a mixing rotor. A Turbulent Flow physics interface from COMSOL is used. As initial conditions for a time dependent solver the flow field is obtained from using a Frozen Rotor simulation. (Figures 1 and 2). It is assumed that the amount of energy imparted by the impeller is far superior to the bubble movement disturbing flow patterns of the rising bubbles.

CO2 concentration as function of time and position is studied. Bubble motion is tracked separately in a Lagrangian spherical particle approach according to Jamshidi and Brenner (2013) [2], in this case using COMSOL Multiphysics® software and the Particle Tracing Module. A link between mass transfer boundary layer and bubble force is established through the mass time derivative of the dissolving bubble (Figure 3), included as the accretion rate of the particle as function of the local Reynolds, Schmidt and Sherwood of a spherical bubble using mass diffusion theory. Bubble deformation effects are taken into account as modifications to the drag coefficient using Eötvös and Morton numbers for rising bubbles according to Roghair et al. 2011 [3].

Due to computational power limitations the simulated section of length ‘’L’’ (also the distance between impellers) is stacked to form the total bubble tower (Figure 4), which can be described as a Pseudo-Periodicity of the flow field using the Particle Tracing Module and the COMSOL LiveLink™ for MATLAB®.

The main goal of this work is to simulate bubble swarm dissolution in a fluid tower to minimise unreacted gases as an outlet product. It is part of optimizing the Slag2PCC process route for CO2 mineralization [1]. 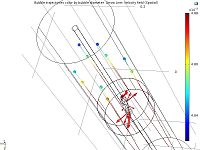