In COMSOL Multiphysics®, if you are simulating several components in a system, or a complete model that has submodels, you can manually couple the physics in different model components when needed. This type of coupling is one example of the manual approach with user-defined couplings. In this article, we discuss how to perform this specific type of multiphysics coupling and direct you to resources that provide further details on how to accomplish this for different scenarios.

In certain cases where it is either motivated to do so or necessary (which we will address later in the article), you may need to model several components in a system and then couple the models to simulate a part of the system or the whole system. Although COMSOL Multiphysics® is not a traditional systems modeling tool, you can model several components and couple them into a systems model. This coupling can be done using variables and derived variables. In the software, each physics interface defines the equations, dependent variables, and a set of derived variables for the respective physics being simulated. For example, in the figure below, an ideal continuous stirred tank reactor (CSTR) modeled in 0D is coupled with a 2D model of a dialysis membrane cell using derived variables. The model represents a real system where a salt in the dialysate is removed over time by continuously pumping the dialysate over the dialysis cell. Mapping from one component to another can also be done for components in different space dimensions with completely different geometries through the use of nonlocal couplings (there will be more on this later).

Schematic of the membrane dialysis model with the tank on the left and the membrane on the right, with the dialysate and permeate labeled.

A model tree from within the software with arrows pointing to the components that are coupled within the membrane dialysis model.

Simulations that demonstrate the use of these types of couplings among multiple model components are detailed farther below.

Models that involve multiple components and use couplings between them include system models, if you are employing a submodeling technique and are mapping the results from a global model to a submodel, linking between two submodels, or otherwise need to split your analysis among multiple components for efficiency to save computational time and resources. Some multiphysics examples and others that demonstrate this and are available in the Application Libraries include:

Regardless of how the coupling is carried out and for what reasons, the variables or solution data from one model component is made accessible and available for use in another model component. A general framework for how to perform such couplings between model components is outlined below.

There are a variety of ways that we can couple the physics between model components. Although there is no specific set of steps that need to be followed, we have outlined a plan you can use to conduct such couplings. It can generally be done through the use of nonlocal couplings and coupling operators and/or derived variables, which we introduce and present the steps for here. 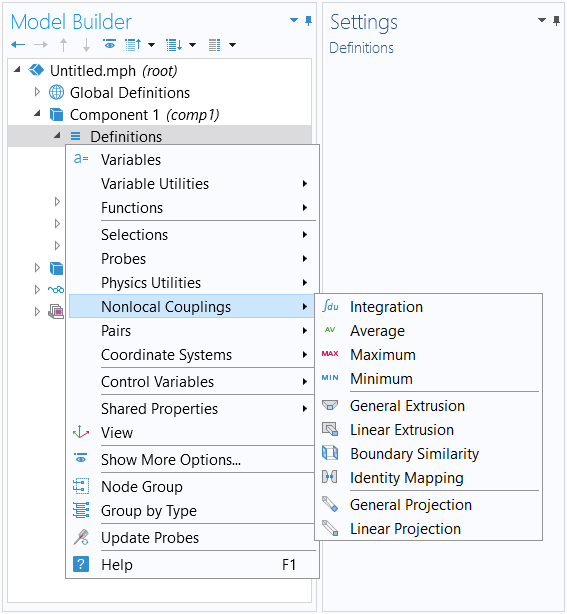 Menu for the nonlocal couplings that you can add to a model component, accessed through the Definitions node in the model tree.

The button for adding Nonlocal Couplings, which is accessed through the Definitions ribbon tab.

The way this mapping occurs is through the coupling operator evaluating an expression that is supplied as the argument in the source model geometry and then defining the result in the destination model geometry. This is explained in detail in our blog posts on accessing nonlocal variables with Linear Extrusion operators and mapping variables with General Extrusion operators. A general procedure for creating couplings through these means would be as follows:

The logic behind dividing defining the physics into two parts (first defining each individual physics interface and then defining the couplings) in the procedure is explained in the Learning Center article on the manual approach with user-defined couplings. Namely, it enables you to search the dependent variables and derived variables as well as access the variable names when formulating expressions for any equation contributions. It should also be noted that in the abovementioned procedure, the nonlocal coupling must be added under the component containing the variables you want to access in other components. Then, within the settings or definitions of the other model components, you enter the coupling operator using the correct syntax. From there, the appropriate expression for the argument of the coupling operator must be used in order to have the desired quantity defined in the component locally. 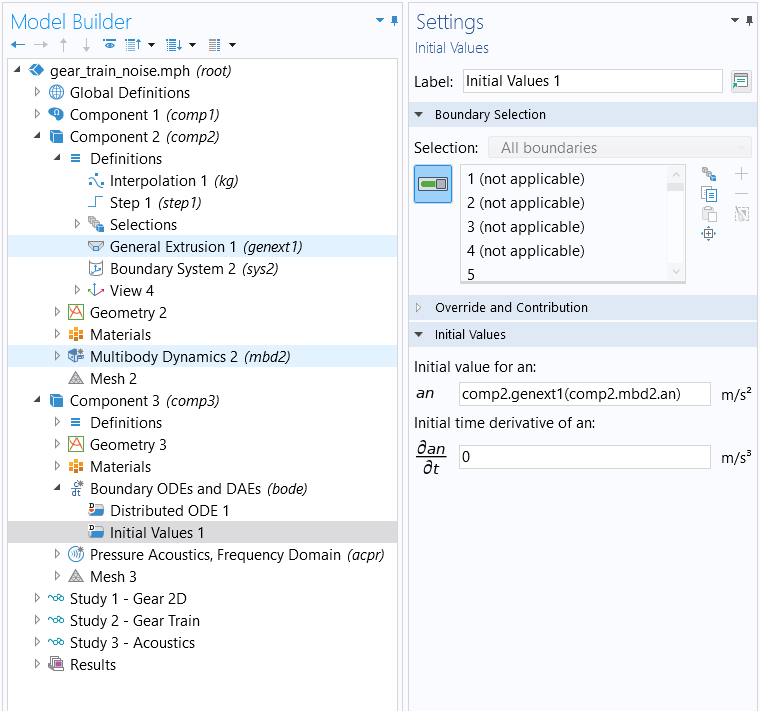 The settings for the Compound Gear Train Noise radiation tutorial model. A General Extrusion operator is defined in the second component and used in the third component under the Initial Values node to map the acceleration between the model geometries.

Apart from using nonlocal couplings, in specific cases you can administer physics couplings between components by including the variables from one model component directly in the settings and definitions of another model component. This can be accomplished in the case where the source variable (variable A in component 1, for example) is defined with a global selection (seen under Equation View nodes in the Selection column of the table with variables). Being "global" and not bound to a specific domain, edge, or point, the variable can be evaluated in any other interface.

If this is not the case, the variable is defined on a specific geometry selection (domain, edge, point) locally in the component and is not available in another component and a coupling feature is needed.

Some examples of this coupling are included here:

Exceptions to this procedure are specific application areas where there is functionality that generates and makes available variables for use in physics interfaces in other model components. These include, for example, the Generate Space-Dependent Model functionality for chemical and reaction engineering applications or the PID Controller add-in for control system applications.

Below, we show you an example of one implementation for coupling the physics among multiple model components, using an extension of a tutorial model as our example.

To demonstrate coupling physics between model components for a multiphysics model, we will once again use the thermal microactuator tutorial model, which simulates Joule heating and thermal expansion. This is the same example that has been used and detailed extensively throughout the Introduction to Defining Multiphysics Models course. It is also available in the software through the Application Libraries.

For this demonstration, we are going to simulate the electrothermal expansion of the device in one model component, while a control system for the device is modeled in a second component.

In this example, we want to control the input voltage to the thermal actuator so that the displacement (measured at the tip of the actuator) stays at exactly 2 micrometers. To do this, we create a transient, multicomponent version of the thermal microactuator tutorial model, wherein a 0D component is added in order to provide a PI controller that controls the input voltage.

The PID Controller add-in enables us to easily set up a PI (or PID) controller for our device, and is what creates the 0D model component with the ordinary differential equations for the PI controller. It is set up for a reasonable controller response with allowed electric potentials between 0 V and 25 V (settings pictured below). The physics are coupled between the components by including the variables generated and definitions created in either model component into the settings of the other model component. 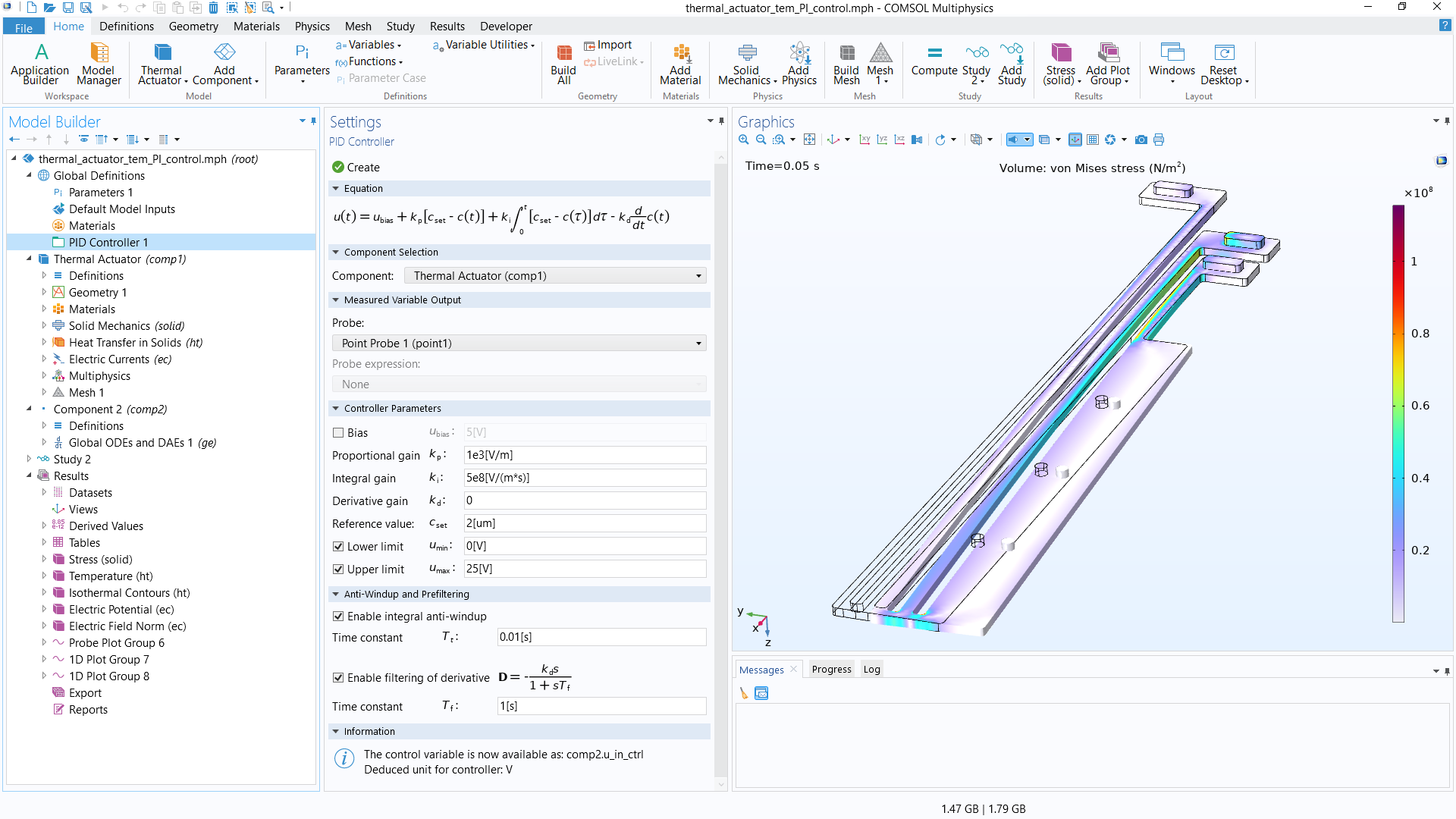 A screenshot of the thermal microactuator model with PI control, with the settings for the PID Controller add-in displayed.

The process of creating this transient, multicomponent version of the thermal microactuator tutorial model is as follows:

Building and setting up this model using the fully automatic approach is covered in a separate Learning Center article on that topic, while using the PID Controller add-in is introduced and detailed in a blog post. As such, those details of the model build are omitted here for brevity, as we want to focus on Step 4 of the list: the coupling of the physics between the model components.

The COMSOL Multiphysics UI showing the Model Builder, Point Probe Settings window, and Graphics window, which is displaying the model. The settings for the Point Probe that was defined to monitor the displacement of the microactuator.

This point probe is then selected as the probe to use for the PI Controller. When creating the PID Controller, a 0D model component is generated that includes the point probe in the equations and expressions for the variables. This results in the coupling of the measured displacement, which is monitored by the probe from the 3D model of the device, with the 0D PI controller model component.

The COMSOL Multiphysics UI showing the Model Builder with Global Equations 1 highlighted and the Global Equations settings.
The ODEs for the PI controller, which includes the point probe in the expression.

The COMSOL Multiphysics UI showing the Model Builder and the Variables Settings window.
The variables for the 0D model component, which includes the point probe in the expression. 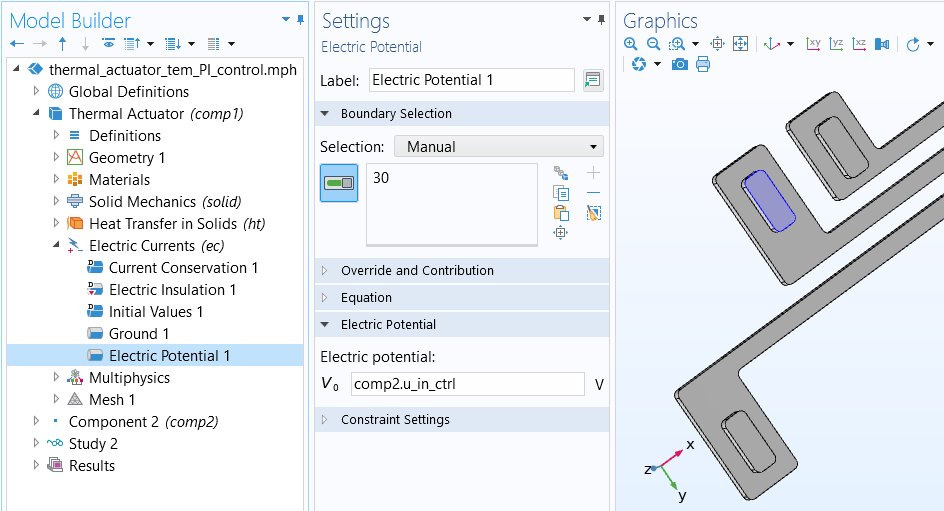 The Settings window for the Electric Potential boundary condition.

In the following tutorial video, you can see a demonstration of this implementation of the manual approach with user-defined couplings, wherein we couple the physics for a multiphysics model between multiple model components.

There are various ways in which you can couple the physics between model components. If you are interested in finding COMSOL Multiphysics® models that contain multiple model components and are relevant to what you are modeling, we recommend searching comp2 in the Application Libraries. You can then navigate to the appropriate application area for the physics you are simulating.

If you are interested in learning more about the use of extrusion operators, you can see the "Nonlocal Couplings and Coupling Operators" chapter in the COMSOL Reference Manual documentation. If you are specifically interested in models that include multiple components and include the use of the General Extrusion operator, we recommend searching comp2 @tag:genext in the Application Libraries. We also recommend the following blog posts: